Gum graft is the treatment for receding gums

The health of the mouth implies having healthy gums. The gums can suffer from a variety of conditions, the most common are gingivitis and periodontitis. In adults over 35, only 10-15% have healthy gums, while 50-60% have gingivitis and 25-28% have periodontitis. Gingivitis is defined as inflammation of the gums and is characterized by bleeding during brushing or without any reason. Periodontitis is an evolved condition of gingivitis, in which there is partial or total bone loss. One of the consequences of these periodontal pathologies may be the first sign of gingival recessions, both conditions unwanted due to their aesthetic appearance and for the increase in dental sensitivity.

In the present case, a young patient suffered from a gum recession in a lower incisor tooth, which was treated in our office by means of a gum graft taken from the patient’s own mucosa. You can see the very satisfactory result in the short and long term as a result of the treatment performed.

Initial situation where we can see gum recession 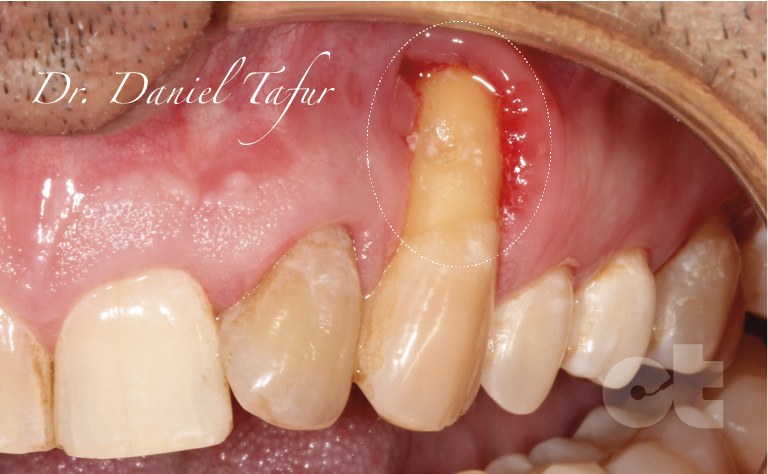 Initial situation where we can see a severe recession 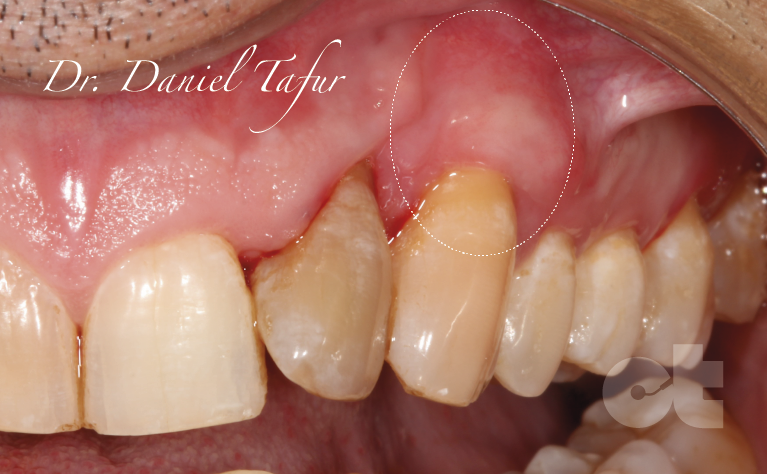 Result after the gum graft

Denture over implants, one of the most popular treatments.

Fixed implant dentures are one of the most popular treatments in middle-aged patients who have problems with advanced periodontitis and multiple absences of teeth. The placement of the implants are strategically and well distributed in the arch. This is essential for...
Read More

How to reduce a face inflammation caused by phlegmon

There are several ways to reduce inflammation in the face caused by phlegmon, also known as dental abscess. It is also one of the most common pathologies among people, It is also quite painful and uncomfortable at the same time. In today´s article we talk about, we...
Read More

Immediat dental implant loading and porcelain veneers   In certain situations, the placement of dental implants is a real challenge for the Implantologist. The following case is one of those situations, especially complex due to several reasons:   The...
Read More

Dental fillings, the best way to take care of them

Dental fillings, the best way to take care of them   Practically all adolescents and adults has a dental filling due to  dental caries. Today we come to talk to you about fillings that, over time, lose color. But not only that, they also tend to wear out since...
Read More

Cosmetic braces   Many people today take great care of their physical appearance and this is where cosmetic devices come in, much better and more comfortable to wear than traditional and metallic devices of a lifetime. In addition, they are barely noticeable when...
Read More

Gingivectomy, everything you need to know about gum contouring

Today, we are here to talk about gingivectomy, a kind of surgical intervention that is performed in our dental clinic in Malaga by our professional in periodontics. Basically, it is an operation in which the gums are cut to get a better aesthetic appearance. We could...
Read More

IT IS A TECHNIQUE FOR THE CORRECTION OF AESTHETIC PROBLEMS, LIKE WHITE SPOTS.   At Tafur Clinic we know that looking good means a lot to you and that a healthy and beautiful smile not only provides security but also conveys a good image. We are specialists in...
Read More

What are receding gums?

What are receding gums?   Hello and welcome to this blog from Dental Clinic Malaga. We are already approaching the Christmas holidays and today we want to talk about the subject of receding gums, everything you need to know about them. What they are, why they...
Read More

Porcelain veneers   Hello dear reader, here we are again, but today we come to talk to you about porcelain teeth, a treatment that we could include within dental aesthetics. They are also known as porcelain veneers and thanks to them you can achieve much whiter...
Read More